It’s just six years since Abu Dhabi arrived on the calendar with Formula One’s first ever day-into-night race, yet the Yas Marina circuit already feels like one of the long-established homes.

The ultra-modern design stands apart due to its unique features, including the LED-lit hotel sprawling over the circuit and tunnelled pit lane exit, as well as joining the likes of Monaco and Singapore in boasting a trackside yacht-filled marina. The long straights and open nature of the circuit promote entertaining racing.

Colossus F1, an F1 in Schools team representing England at the 2014 F1 in Schools World Finals this week in Abu Dhabi has claimed a new world record with the team’s car sprinting along the F1 in Schools 20 metre race track in a time of 1.003 seconds, shaving nearly two-hundredths of a second off the previous record – 1.020 seconds – held for seven years by Northern Irish team, TEAM FUGA.

The record-breaking run was not without controversy. Just as in F1, the team were challenged for pushing the boundaries of the regulations, with the fastest of the team’s runs using an air cushion device at the start gate, an innovation designed by Colossus F1 to minimise air loss when the car was released.

The team, however, believes that another of its ‘innovations’, a water tunnel test programme, also gave it the edge which produced the world record time.

The opening ceremony of this year’s event, being held at Ferrari World Abu Dhabi, preceded the first day of judging in this global educational initiative, with the 38 teams in the spotlight for the first of two days of intense scrutiny with verbal presentations, pit display and portfolio assessments and plenty of high speed action in the racing time trials.

A team of students from North Leamington School – Whittle Wonders – were jumping for joy yesterday after being crowned F1 in Schools UK National Champions 2014 and winning a place at the 2014 F1 in Schools World Finals in Abu Dhabi.

The UK Champions will not only have the experience of a lifetime in Abu Dhabi, they also receive tickets to the 2014 British GP at Silverstone, a Williams F1 team factory tour, an Arden Racing Academy presentation and the Codemasters F1 2013 game for each team member.

It’s been many months of hard work for the team of 15 and 16 year olds, who not only took victory overall but also won the Portfolio Award and Fastest F1 Car Award with their car racing along the F1 in Schools 20 metres race track in a time of 1.128 seconds.

The team were presented with the National Champions trophy by F1 in Schools Patron and Williams F1 Team Head of Vehicle Performance, Rob Smedley. After receiving the trophy Team Manager, Thomas Bradford, said:

“We’re really pleased to have won. I think we had the best car today. It was the fastest and well engineered. We’ve been working on the car for a year, designing, evaluating and refining it. It’s going to be brilliant to go to Abu Dhabi and now we’ll continue with the work on our car. We already have some ideas of how we want to improve it for the World Finals and hopefully it’ll be even faster as well.”

The 2014 F1 in Schools National Finals pitted 30 winning F1 in Schools Regional Finals teams against each other, all vying for a trip to Abu Dhabi. The competition, with Formula One at its heart, challenges teams of between three and six students to form a Formula One team, designing, manufacturing, testing and racing an innovative F1 in Schools car, as well as producing a pit display and printed portfolio, and giving a verbal presentation of their work to a panel of judges.

16 awards were presented, rewarding the hard work and high standards of work produced by the teams of students. Runners-up to Whittle Wonders was a team of students from Robert Mays School, Odiham called Colossus F1 and this team also won the Verbal Presentation Award. The third placed team was Infinity from St John Payne School, Chelmsford and they also won the Best Engineered Car Award. The Best Rookie Team Award was presented to newcomers, Venom, from Strode College, Street.

The Team Identity Award was won by Infusion Racing from LSA Technology and Performing Arts College and the Sponsorship and Marketing Award was presented to Symscape Quantum Racing from The Crypt School, Gloucester. Surge Racing from Latymer High School, Hammersmith took the Innovative Thinking Award and the Judges Discretionary Award went to Rapid Input from Dunfermline High School. 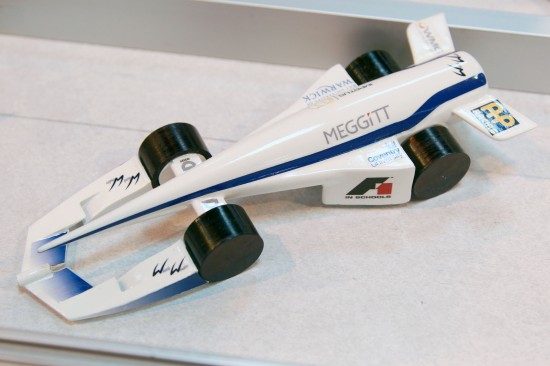 Red Dragon Racing from Connah’s Quay High School impressed the judges to win the Pit Display Award and the Research and Development Award was won by BCS Racing from Barry Comprehensive School. The FIA Women in Motorsport Award was given to the girls from Team Nero from Regent House Grammar School, Newtownards, Northern Ireland.

The exceptional support given to the students by their teachers was also recognised with the Teacher of the Year Award won by Gary Carleton, the tutor for Northern Ireland team, Ignition from Cookstown High School.

“We’ve enjoyed a very exciting National Finals this weekend. The level of work produced by the students is outstanding and is a credit to all the participants for the effort they put in to meeting the challenge presented by F1 in Schools. Our congratulations go to Whittle Wonders from North Leamington School. It is the third year of competition for the school and after improving each year, they have finally reaped the ultimate reward with a place at the National Finals and a trip to Abu Dhabi to represent the UK.”

Just a few years ago Formula One – and motorsport in general – did not have any presence in the Middle East. Now the region wants to be associated with what Formula One represents – technological excellence, innovation, the future.

Bahrain has not only built a venue that is among the very best in the world and deservedly won acclaim for its Grand Prix, but it has also built foundations for the current growth of interest and investment in Formula One across the Middle East.

The Bahrain International Circuit (BIC) staged its first Formula One event in April 2004, winning the FIA promoters’ trophy for that season. Commented the sport’s dealmaker extraordinaire, Formula One Management CEO Bernie Ecclestone at the time:

“It was a real pleasure to bring Formula One to the Kingdom of Bahrain, and I’m pleased to confirm that this relationship will continue into the future.”

Since its inaugural race, the Bahrain event has drawn widespread acclaim for its facilities and its impressive programme of pre-race events. In 2006, it was honoured with hosting the season opener when Melbourne, the traditional first-race venue, was busy with the Commonwealth Games. Said BIC Chairman, Talal Al Zain:

“The success of the Grand Prix has however reached even further than we dared hope when we embarked on this great adventure, and we are delighted to see both interest and involvement in the sport from fans, sponsors and other ventures around the region has blossomed from our achievements. Our new agreement with Mr Ecclestone ensures that Formula One will retain its home in the Middle East long into the next decade, and that the Kingdom will continue to host the world’s biggest sporting series.”

The news that Abu Dhabi would host a Grand Prix in 2009 on a new racing circuit on Yas Island was also greeted with much fanfare. Said Bernie Ecclestone:

“We are delighted to bring Formula One to Abu Dhabi. It was a mutual decision to have a second race in this economically fast-growing region and I have no doubts that Bahrain and Abu Dhabi can co-exist perfectly. There are five countries waiting at the moment to have a race and we have decided to come here – this should speak for itself.”

The Abu Dhabi government said it had invested $40 billion in the Yas Island development, so the cost of an annual Formula One race is relatively low by comparison given that the aim is to build up a huge tourist industry on the island. Abu Dhabi is also able to attract more local spectators to the event as it is the highest per capita city in the world, unlike Bahrain where wealth is much more restricted.

The development is all part of the plan to wean the economy off its dependence on oil. Abu Dhabi started its own airline, Etihad Airways, in 2003 in an effort to emulate its neighbour and rival Dubai as a tourist destination and spent a huge amount of money expanding the Abu Dhabi International Airport.

For Ecclestone such projects are a gift as he looks for ways to expand Formula One’s revenues in the future with a new generation of high-paying races to follow in the footsteps of Bahrain and Shanghai. These will probably replace some of the first generation events outside Europe which have not yet lived up to local expectations.

Bahrain may not originally have been a success in financial terms, with very small crowds, but the publicity generated has been good for the country. Bahrain’s plans to be a holiday destination have long lagged behind Dubai, and Abu Dhabi is now embarked on an aggressive programme to catch up and rival both.

The deliciously witty crew at grandprixdiary.com have, as usual, put their fingers right on it. The latest generation of F1 venue may be OK for supermodels and sundry celebs, but Hermann Tilke‘s circuit design has killed racing.

And why does this guy get all the business anyway?

The list of contracts he’s won is impressive but it begs the question whether it is good for the sport for one architect to maintain such a grip on circuit design.

Bring back the old style of circuit, we say. You don’t need all this plastic frippery when all that’s required for proper F1 racing is a nice bit of tarmac, handy thermos and, in the words of Clive Bowen – Founding Director of Apex Circuit Design – a track that builds in confidence and grip for drivers just where they need it the most to make a pass.

In response to F1 writer Joe Saward’s analysis of the subject, Bowen suggests how we can get around the problem.

His three ways make a great deal of sense.

Just been watching Senna driving out to the Yas Marina circuit. Everyone’s alluded to it, but that pitline exit has to be a major accident spot once the drivers start to put their foot down. Looks more like a car park. A very expensive one!