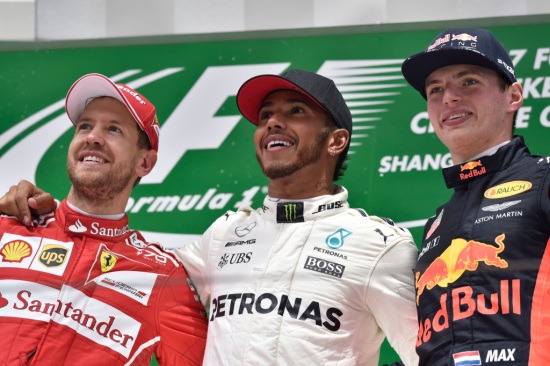 We could have a fight on our hands.

Lewis Hamilton may have dominated today’s Chinese Grand Prix with Sebastian Vettel second and Red Bull’s Max Verstappen third – having moved up from 16th on the grid to finish third, but I’m pleased to say the season could turn out to be a humdinger between the two champions as Hamilton and Vettel battle it out.

Lewis Hamilton: “My pole lap put me in a great position and then the start was just fantastic. I’m really happy with my starts right now so I want to keep that up!

“During the race I needed to keep my composure in some really tricky conditions out there. After the pit stop under the Safety Car the speed was low and the tyres were very cold, so it would have been very easy to make a mistake, so I’m just grateful that I didn’t. In those final 20 laps Seb and I were just pounding around as fast as we could, exchanging fastest lap times, that’s what racing is all about.

“In the future there will be times when we don’t have a Safety Car and we won’t have that gap. I’m excited for that. It’s very close and there were times when it was hard to match Sebastian. It has been a fantastic weekend… Big congratulations to everyone, especially those back home, I hope they’re celebrating and feeling the spirit and the fight.”

Sebastian Vettel: “The race was a lot of fun, very entertaining. Conditions were tricky at the start, you never know what can happen in those moments, so I was perhaps a bit too conservative. Then we chose to change tyres since the track was quickly drying out, so that we could take advantage from the slicks; but luck was not on our side as the safety car came in right after.

“I can’t say how much this affected the final result, it was still a long way from there to the finish, but I think it had an effect. From then I had to work my way through the field, and I had a tense wheel-to-wheel fight with Ricciardo. I like this way of overtaking, when gaining position comes at a price and not simply by opening up the DRS.

“At that moment though, the gap to Lewis had widened, and I kept pushing to keep some pressure on him, while asking my engineer what pace was needed for me to catch him. I think that pace-wise we were a match today. Sometimes he was faster, sometimes I was: if we can fight with Mercedes also in Bahrain that will be again good news. We can still improve.”