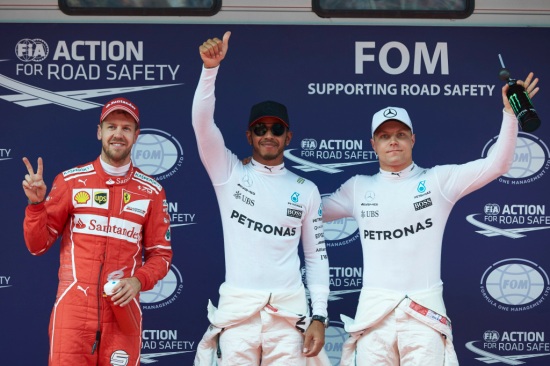 Just ahead of Sebastian Vettel. The Brit’s 1:31.678 was 3.72s quicker than the 2016 pole position time and 0.56 seconds faster than the all-time circuit lap record set by Michael Schumacher in 2004. Valtteri Bottas will start tomorrow’s race from P3 having missed out on the front row by just a thousandth of a second (equivalent to 5.91cm) in an intense battle with Vettel.

Lewis Hamilton: “It’s been an interesting weekend so far, obviously, after missing running yesterday. It’s been a challenge for all of us, trying to compile a lot of yesterday’s work into this morning. Ferrari have been so fast through practice and then into qualifying. We knew it was going to be close and that we’d have to pull out all the stops to beat them.

“I managed to just chip away at it session to session, then make my last lap my fastest lap – which is always the target but doesn’t always work out that way. The lap started off not quite as well as my previous attempts. But from there it got better and better. I felt really strong coming into the final corner knowing I was up by a couple of tenths.

“But it’s always a bit nervy going into Turn 14, as you want to brake late to gain some time but it’s easy to lose more if you get it wrong. Waiting to find out what the others had done after I crossed the line was pretty tense!

“I’m really happy with today and super grateful for the huge effort the team had put in to keep us in the fight. It’s more exciting than ever right now. We’re really fighting these guys out there and that’s what racing’s all about. It pushed you to raise the bar every time you go out, which I love. A big thank you to all the fans too. There were a lot of British flags out there which is great to see.”

Sebastian Vettel: “It was a bit closer than in Australia, so a good session overall with lots of chances for tomorrow. We’ll see what the race can bring, with the different conditions and everything. Of course I would have liked to be even closer, knowing that the Mercedes would be very strong in Q3, as they proved to be. We had some luck with Valtteri, because when you’re a thousand of a second apart, it could be one way or the other.

“I was happy with my lap, even if I braked a bit too early for the last corner, hit the kerb hard and had to wait for the car to settle. That’s where I lost a bit of time, but not all the gap to Lewis. There wasn’t much more I could have gained. So this result on a totally different track, with conditions significantly cooler than Melbourne, is definitely good news. The confidence is there, I trust what the car is telling me and she seems to respond to what I tell her. It’s a good match but we need to improve further.”

Valtteri Bottas: “It’s a real shame Sebastian managed to get between us. I think last time it was a couple of hundredths and now it’s a thousandth. Around a lap here there are a quite a lot of places you can lose one thousandth of a second, so I will look to see where improvements can be made as always.

“But anyway, the race is tomorrow and we are first and third on the grid as a team, which is a good place to start. Anything can happen with the weather too. Lewis was strong today and Ferrari were very quick too. We were always expecting a close fight and I think it will be the same tomorrow.

“Thanks again to the team, who did a great job in the short amount of practice time we had today to get the car set up well. It was really enjoyable to drive. Let’s see what tomorrow brings.”

Error: Twitter did not respond. Please wait a few minutes and refresh this page.