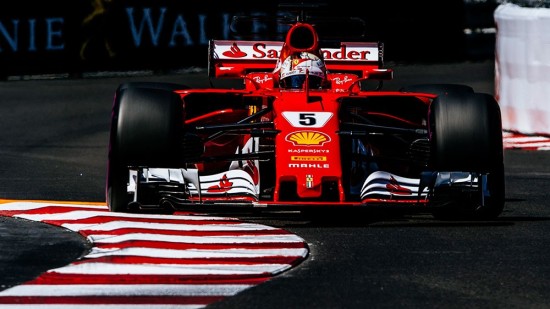 A historic win at a historic race: Sebastian Vettel took the victory ahead of Kimi Raikkonen as Ferrari triumphed in Monaco. Red Bull’s Daniel Ricciardo was third. Lewis Hamilton battled from P13 on the grid to claim seventh at the chequered flag.

This was the Scuderia’s 227th world championship win, and the 44th of Vettel’s career. He now leads the championship on 129 points.

As always in Monaco, so much is at stake in the few seconds it takes to get off the grid and run down to the braking zone at Sainte-Devote. However, when you have both your cars on the front row, you in fact have the most normal of starts.

Raikkonen got away well from pole on the right side of the track, pulling Vettel along behind him, who was fighting off the Mercedes. The two SF70Hs soon pulled out a bit of a lead over Bottas, Verstappen and Ricciardo. However, the hot conditions made it difficult to follow another car too closely as there was a risk of overheating. Vettel was running around 1’14” behind Raikkonen at this point, but the Ferraris began to up the pace, lapping in the low 1m 17s.

The basic strategy was quite straightforward: just one tyre stop shortly before half distance, switching from the Ultra to the Superset – therefore it was best to try and build up a small lead right away. A sixth of the way through, there was just a little more than two seconds splitting the Ferraris, while Bottas was dropping back. Things livened up on lap 15 with Vettel posted a fastest lap of 1’16”197.

Next time round, Hulkenberg’s Renault began smoking at the back in the run down to Mirabeau. The engineers started planning for a safety car scenario, but only yellow flags were required.

By lap 26, the backmarkers were already on the agenda and Raikkonen lost time getting by Button and Wehrlein who were scrapping between themselves. Vettel also got past but Bottas had made up 4 seconds and therefore the two Ferrari men responded immediately. On lap 32 Verstappen’s Red Bull kicked off the run of pit stops and next time round it was Bottas’ turn. Immediately Ferrari moved to protect its position and, as planned, brought Raikkonen in first for his stop.

Vettel thus found himself leading from Ricciardo who was pushing very hard, trading fastest sector times with Seb. Vettel’s best lap, a 1’15”587, gave a good idea of the Ferrari’s potential. Ricciardo pitted at half-distance and Vettel continued to push in anticipation of his stop at the end of lap 39. Would that be enough to get him ahead of Raikkonen? Yes, the move worked.

In Monaco, it usually takes some major incident for things to change at the front. Vettel continued to push, while Raikkonen held off Ricciardo. And then came that major incident: with just 18 laps to go, Wehrlein was hit by Button and his Sauber was tipped on its side against the barrier at Portier.

The Safety Car came out and the gaps were wiped out, including the leader’s 12 seconds over Raikkonen. Vettel asked about Pascal over the radio and was told he was okay. The Safety Car stayed out for a long time, coming in with 12 laps to go. The race was on again with the two Ferrari’s getting away well. Behind them there were some battles and Vandoorne went off at Sainte-Devote.

“The strategists said P10 was probably the maximum today, so it feels great to have beaten that target. To score six points, considering where I was on the grid after a disastrous day on Saturday is a good recovery.

“Today it was impossible to overtake and I tried everything to get past Carlos (Sainz) at the end. I’m just grateful to have ended up in P7. I went on the radio at the end there to make sure the team know that this battle isn’t over. We’ll be sure to push those red cars hard next time out in Canada. We’ve got a real fight on our hands, but there are still 14 races to go.”