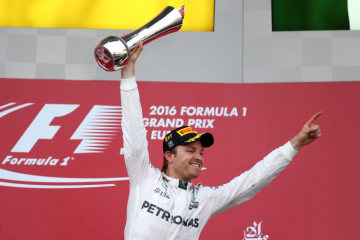 Nico Rosberg took his 19th career victory today – his fifth of 2016 – to become the first Grand Prix winner at the Baku City Circuit. A difficult afternoon for Lewis Hamilton saw him recover from a P10 grid slot to eventually finish fifth. Rosberg (141) leads the Drivers’ Championship by 24 points from Hamilton (117) in P2. MERCEDES AMG PETRONAS (258) lead Ferrari (177) by 81 points in the Constructors’ Championship.

Nico Rosberg: “I am so happy to win here in Baku. I really felt at one with the car in a way I’ve never felt before. I didn’t have the feeling that something would go wrong at any point today. The car was awesome this weekend, so thank you so much to the team for this. I already began to sense it in Qualifying yesterday, this perfect feeling.

“We expected a Safety Car moment in this race, so I was hoping that it wouldn’t happen as that tends to mess up the race in general. But it was a pretty straightforward afternoon for me at the front. There was only one little concern when I felt that I was down on power a bit in the middle of the race. The engineers weren’t allowed to tell me what I had to do, so I had a look at my steering wheel and tried to fix it myself, which worked out well.”

Lewis Hamilton: “I have no idea what happened out there today. I just had no power. I was in an engine mode which made it feel like I was driving without ERS for a long time. We have hundreds of different combinations of switch position on the wheel and, no matter how much you study, there’s no way to remember them all. I was driving around looking at my screen trying to work out what was wrong – but I couldn’t see anything I’d done differently.

“It’s such a complicated, technical formula we have now and I don’t really see the benefit in preventing us from being able to fix these things out on track. It was just a real shame that I couldn’t race. If I’d been able to resolve it, I might have at least been able to be a part of the show and fight with the guys ahead of me. With about 10 laps to go it sorted itself out – but by that time there was nothing to be gained or lost as I was more than ten seconds behind the guy in front and the same ahead of the guy behind. I actually turned the engine down at the end to save it, knowing that I don’t have so many left for the season. But it wasn’t to be today, so the result is what it is. I’ve got points for P5 and now I’ll try to bounce back at the next race.”

Toto Wolff, Head of Mercedes-Benz Motorsport: “We all went into the race expecting lots of action – and while maybe the 51 laps didn’t deliver as many fireworks as we saw in other races this weekend, there was plenty going on in our garage! First of all, let’s talk about Nico. He did a fantastic job this entire weekend – a great pole position yesterday then a dominant race performance today. He got a good start, pulled away and just controlled everything from there; it wasn’t a problem-free afternoon for him but it was pretty close to being so.

“For Lewis, the first target was to survive lap one; he kept his nose clean and then started picking off the cars in front of him. He reported some electrical de-rates quite early on but it only became clear around his pit stop that he was suffering from quite a big performance deficit with the car. Once we had identified the problem, it could have been changed with a single radio message – but the rules, which are of course the same for everybody, prevented us from doing so, and we were only authorised by the FIA to use very specific phrasing. It was an unusual and counter-intuitive problem with an engine mode so there was no way Lewis could know what to change to solve it. Eventually, he managed to find the right solution – as Nico had done several laps earlier, having switched into the mode causing the problem part way through the race – and then he set the fastest lap of the race at that point.

“However, it was too late to recover any position, so he took the smart decision to save the engine and bring the car home. We have had a warm welcome here in Baku and the organisers have delivered a fantastic and exciting new street circuit. But from the team’s point of view, although we extended our points lead, we should have come away with more – and correcting those problems will be our focus in the coming days.”

Paddy Lowe, Executive Director (Technical): “Starting at the very beginning, we were relieved to see both cars make it cleanly round the first lap after the chaos of the GP2 races earlier in the weekend. From there, Nico did a fantastic job. After a great pole position yesterday, he capitalised on that with a superbly controlled drive from start to finish – managing his tyres, engine and brakes perfectly.

“For Lewis, it was never going to be easy from P10. Unfortunately, this turned out to be even more difficult than we had predicted. The pace of the car was not as strong as it had seemed on our long runs during Friday’s practice sessions, with some of our rivals proving impossible to overtake. This is something we need to look into and understand, as he wasn’t able to extract the pace he’d shown throughout the weekend to that point.

“We did see a problem with Hybrid energy management on both cars. There was a configuration related to the management of Hybrid energy which unfortunately was not correctly tuned during our race preparations. What this caused was premature de-rates down the straight, costing the driver around three to four tenths of a second per lap. It was only present when the driver selected a specific strategy mode on the steering wheel, with the other modes unaffected. Unfortunately, under the new radio restrictions introduced for this year, the team is unable to tell the driver which mode to use – or not to use, in this case.

“Having sought permission to do so from the FIA, we were able to give the drivers an indication – but nothing more. It was a bit like asking them to solve a crossword puzzle with minimal clues while driving at in excess of 200mph, which is no mean feat! Unfortunately for Lewis, it took around 15 laps to rectify the problem. This lost him a lot of time before eventually he was back to full speed – by which time it was too late to make a charge for the podium, which was a definite possibility for him today. The bigger problem we need to understand is why his car was not as quick as it should have been overall.”