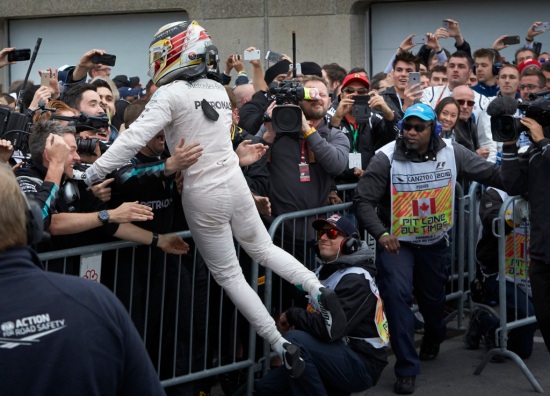 Following an electric start by Sebastian Vettel in the Ferrari, Lewis Hamilton took his 45th career victory today – his fifth at the Circuit Gilles-Villeneuve and second of the 2016 season so far. Nico Rosberg recovered to P5 after an eventful race which saw him take to the grass at the first corner and pick up a puncture in the closing stages.

Rosberg (116) leads the Drivers’ Championship by nine points from Hamilton (107) in P2. MERCEDES AMG PETRONAS (223) leads Ferrari (147) by 76 points in the Constructors’ Championship.

Lewis Hamilton: “I don’t know what happened at the start. My practice start before the formation lap was perfect and I thought ‘this is going to be a breeze, getting off the line’. But when it came around for real it felt like I was going nowhere, so I need to figure out what happened there. I then got massive understeer into Turn One with cars attacking from all sides and had an unfortunate tap with Nico. After that it was just about trying to hunt down Sebastian. He was lightning on the first lap and we both had good pace from there. Other than one small lock-up into Turn 10 I didn’t make any mistakes all race, so I was really happy with that. It was very much about managing tyres today and the team were spot on with the strategy call.

“I really enjoyed the race – everything went unbelievably smoothly. Every time Sebastian closed up I just had enough to keep the gap. I was just so in the groove.”

Nico Rosberg: “Today’s race was really tough. Starting at the beginning, Lewis had a bad start, mine was decent and Sebastian got a super start. So, I was alongside Lewis and tried around the outside. I had to try the move or accept I’d be behind him. In Barcelona it worked but this time it didn’t. It was a hard manoeuvre from him but that’s racing and I need to do a better job next time.

“I lost a lot of places going down the escape road and that cost me a shot at the race. From there I did my best to fight back and I saw there was a chance of a podium – but then I got the puncture and had to pit again – dammit! I was pushing hard after that to regain the positions but it was a massive mission managing the car with brake warnings coming on and running low on fuel. It was a good battle with Max – again, on the limit but good racing. I tried everything to get past him and had a massive spin at the end.

“On that final lap I just about managed to drag it round for P5 ahead of Kimi, so a disappointing result as our car was awesome today but that’s how it goes sometimes. I’ve got two days at home now to get ready and go for it again in Baku.”

Toto Wolff, Head of Mercedes-Benz Motorsport: “That was a fantastic, action-packed race like we expect in Montreal – and a sensational drive from Lewis to take the win. As we went into today’s race, it wasn’t clear whether one stop or two stops would be the way to go in the cold conditions and depending on how the tyres warmed up. But when Sebastian stopped behind the VSC, then it was clear that making just one stop was our best chance of winning – and then it was up to Lewis to keep the tyres alive, stretch the stints and do the pace we needed. He did a brilliant job of that and, when we could see from other cars on older soft tyres that they were holding on well, it was clear that the win was really on.

“As for Nico, his day was defined by Turn One and the fight-back from there. Lewis reported on the radio that he had understeer and cold front tyres going into the corner – and there was some risk for Nico to be running on the outside line. It was a hard move and clearly you don’t want or expect to come out of Turn 2 with cars in 2nd and 9th positions when you start from the front row; but to be honest, these discussions after each race give me a feeling a little bit of deja vu. After that, Nico got his head down and did a fantastic job; he was on course for the podium before he suffered a slow puncture, which meant we brought him in for a second stop, then he was managing the car and also marginal on fuel, so he couldn’t attack every lap. He had a great battle with Verstappen, who was defending very well, then lost the car under braking into the final chicane, fighting hard for every point.

“From the team’s perspective, a number of factors meant we didn’t take a double podium, though we did score the most points of any team today. But the pace of Ferrari and Red Bull showed that the competition is right there with us – and we need to get everything right in order to maintain our position at the front.”

Paddy Lowe, Executive Director (Technical): “An eventful and entertaining race from start to finish. It was far from the perfect start, of course. We knew it was going to be tricky with such cold conditions, as it’s difficult enough to warm the tyres up at this circuit even on a hot day. Sebastian, however, had an outstanding start, coming straight past both of our drivers well before they ran out of road at turn two. From there, it was very much a recovery drive for us.

“We opted to put both cars on a one-stop strategy once both Ferraris appeared to have committed very early to a two-stop. This worked well and played a big part in the victory for Lewis. For Nico, however, a late puncture forced a second stop. It looks like he also collected some debris in one of his radiators, as he had overheating throughout the race. While this may not necessarily have affected his performance, it would have been quite a big distraction to manage. A podium was a possibility for him today – but unfortunately it didn’t work out. Our congratulations to Lewis for yet another Canadian grand prix victory – and also to the team in the garage and on the pit wall, who were flawless in their pit stops and strategy calls.” 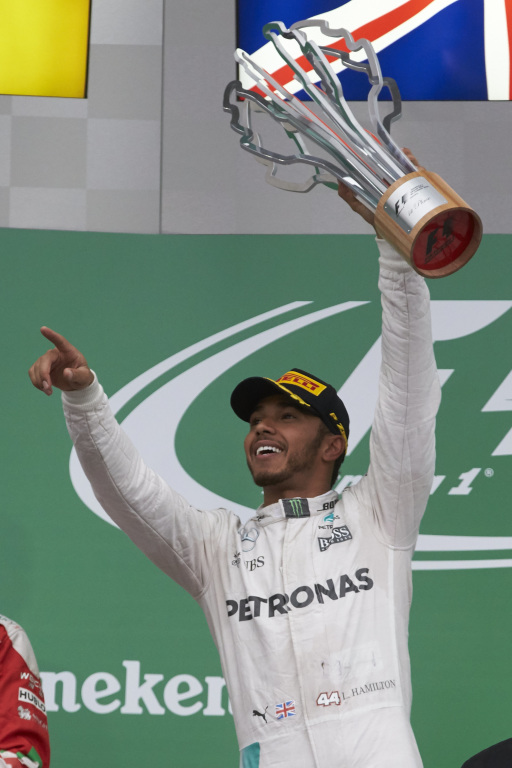