It was a disappointing weekend for Sahara Force India in Budapest with both cars retiring from the Hungarian Grand Prix. The team remains in fifth place in the championship at the half-way point of the season.

DNF Nico Hulkenberg VJM08-01
Strategy: Used Softs (15 laps) – New Softs (21 laps) – New Mediums (6 laps)
“It’s a shame we lost the opportunity to get a great result today. I didn’t have much warning that there was a problem with the front wing – there was a harsh vibration just before it broke and after that I was heading straight into the barriers. The final impact was not too bad because that part of the track is well protected and it absorbed the energy nicely. Up until the accident, things were looking very positive: I had made a great start and was racing with the Red Bulls which shows the step forward we have made with the b-spec car. The good news is that we have time over the next week to analyse what happened today and get the solutions in place before the summer break. Reliability has been a real strength of ours this season so it’s unusual for us to have these issues and the team will do its homework before we arrive in Spa. I go into the summer break knowing that we are competitive and that we can have a strong second half of the season.”

DNF Sergio Perez VJM08-02
Strategy: Used Softs (16 laps) – New Softs (14 softs) – New Mediums (11 laps) – Used Softs (3 laps) – Used Softs (8 laps)
“It was a really tough weekend for us, from the Friday to the Sunday. We have a lot of reasons to be disappointed about the race because I feel we could have scored some really big points. The first few laps were very strong and we made up a lot of positions, but the contact with Pastor Maldonado compromised my race. I was as cautious around him as I could be and left him plenty of room but unfortunately it wasn’t enough. After that, getting points was always going to be a challenge and ultimately some brake issues put an end to our race. Looking at the positives, up until the clash with Pastor the car performed very strongly and this gives me the confidence we can really challenge for good results in the second part of the season.”

Otmar Szafnauer, Chief Operating Officer:
“It has been a difficult day and it’s disappointing to come away from Budapest empty-handed. Nico was on course for a good helping of points until he suffered an issue with the front wing on the approach to turn one. We are still looking into what caused the wing to break, but the most important thing is that Nico is perfectly okay. Sergio’s afternoon suffered after Maldonado made contact with him after Sergio had passed him going into turn one. That incident cost us a lot of time and resulted in some damage to the right side of Sergio’s car. As the race continued, he was suffering with a long brake pedal and we had to retire the car. Sometimes in racing things don’t go your way and this was certainly an unlucky weekend. We will regroup ahead of Spa and come back stronger for the second half of the season.” 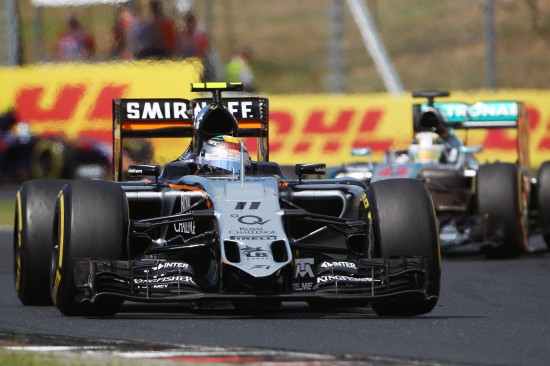