Felipe Massa arrives on the grid.

Valtteri Bottas finished fourth and Felipe Massa sixth in today’s Spanish Grand Prix. Bottas’ long second stint on the option tyre allowed the team to change from a three-stop to a two-stop race, helping him to keep the closing Ferrari of Räikkönen at bay in the final laps. Massa managed to make up positions in the opening stint and drove an untroubled and consistent race to collect eight points for the team.

Rob Smedley, Head of Performance Engineering: “Overall I’m pleased with the result today. The car has shown pretty good pace throughout the weekend and we wanted to see if we could convert that potential into points. There was a lot of talk about different teams bringing updates for this race with big gains. We have shown that our improvements have moved us forwards and this ended up being our closest finish to Ferrari. It was a good job by the aerodynamic team and all the people back at Grove, as well as an excellent operational performance from the team today, with good strategy choices and well executed pitstops. We need to keep heading in this direction and to keep finding additional performance gains in this package to help us challenge for podiums in future.”

Valtteri Bottas: “It feels good to split the Ferraris for a second race in a row and this has been another solid points haul for the team. Tyre life was better than we expected and as a result we changed from a three-stop to a two-stop race, which was a good strategic choice from the team because it allowed me to keep Räikkönen behind. The big positive is that we were closer to the leaders than we have been at any point this season. That gives me a lot of hope because we have shown that the updates we are bringing are improving our performance. I want to thank all the team here and in Grove for providing me with a great car to go racing with, and I’d also like to thank Mercedes HPP as they continue to push hard on the power unit to help us keep our competitors at bay.”

Felipe Massa: “It was a good race for the team, scoring 20 points, not losing too much to Ferrari, but also getting a lot more than Red Bull which is really important and positive for our championship position. I managed to overtake cars on the first lap and then fought hard with Kimi (Räikkönen) for a long time, which was hard on the tyres. Because of the extra degradation a three-stop race was better for me today, but it meant the others were too far ahead. We finished with one car in front of a Ferrari so we have shown that we can be competitive with them and we can now look forward to Monaco which will be a very different test for the car.” 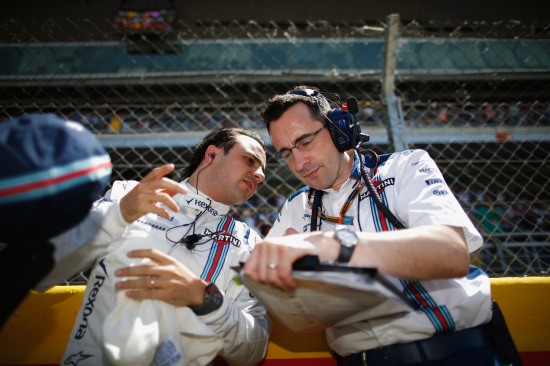 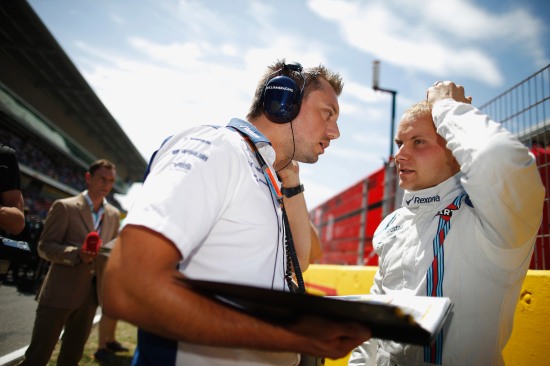 Valtteri Bottas on the grid.