Testing has begun on a device that can sniff out the presence of disease by smell.

With the help of University Hospitals Bristol NHS Foundation Trust, the technology enables gasses emitted from faeces to be analysed in under an hour, leading to a rapid and inexpensive diagnosis. Such early detection could reap real health benefits for millions of people and help prevent the spread of infectious disease.

Gastro-intestinal diseases afflict over four billion adults and children each year. Delays in diagnosis can lead to patients being ill for longer, some may die, many will cost more to treat and infections may spread to other people. In England and Wales there are over 50,000 cases of Clostridium difficile reported each year: this infection prolongs a stay in hospital, is associated with a high number of deaths and costs the NHS £200 million annually. 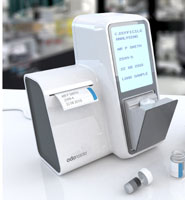 A £1.3 million Wellcome Trust Translation Award will cover a three-year programme of work. It will support the development of OdoReader prototypes, which will then be tested against the industry gold standard method of making the diagnosis. The final produce will undergo a clinical trial before becoming available for sale around 2013. Says Chris Probert, Professor of Gastroenterology at the University of Bristol, and Consultant Gastroenterologist at University Hospitals Bristol:

“For a long time it has been known that stools have a distinctive and different odour if there is an infection. What OdoReader does is take this knowledge a step further by comparing the odour of faeces of patients with those from patients with specific gastro-intestinal disease to make a rapid diagnosis at the point of care.”

It’s also thought that OdoReader has potential far beyond that of being a portable device for diagnosing C difficile. It could be used for a range of other gastrointestinal disease as well as lung and urinary tract diseases.