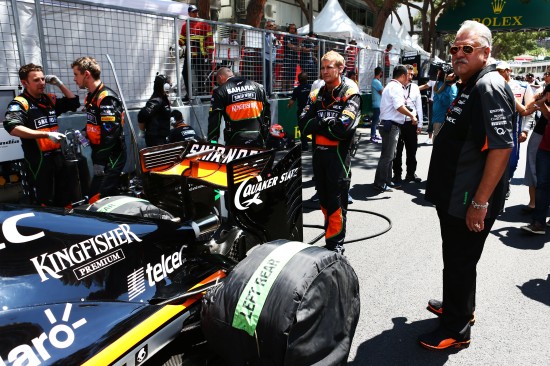 The team scored six points today as Sergio Perez raced to seventh place – securing his first points finish on the streets of Monaco. Team mate Nico Hulkenberg recovered to P11 after being pushed into the wall by Fernando Alonso on lap one of the race.

P7 Sergio Perez VJM08-02
Strategy: Used SuperSofts (36 laps) – New Softs (28 laps) – Used SuperSofts (14 laps)
“I’m very happy right now. As a team we’ve done a fantastic job all weekend and seventh place is the result of all this hard work. For me it was a normal race – very straightforward and quiet, which is strange for Monaco. I was racing on my own for most of the race because the cars ahead were able to pull a gap on me and I had space to the cars behind. It was difficult to keep concentration for 78 laps, but after the safety car I was on fresh supersoft tyres and it was really good fun. I was able to attack Kimi (Raikkonen), but there wasn’t an opportunity to get the position. It’s a very important result for the whole team and gives us six points for the championship. It means I’ve scored points in half the races this season, which shows we’ve done a good job of maximising our opportunities.”

P11 Nico Hulkenberg VJM08-01
Strategy: New Softs (1 lap) – New SuperSofts (30 laps) – New Softs (47 laps)
“My race was obviously very difficult right from the start: Fernando (Alonso) more or less pushed me into the wall on the first lap and from that moment I basically had to play catch up. I knew he was there so I left him a bit more space and turned in later, but he must have locked up as he crashed into me and sent me straight into the wall. The only damage was to the front wing, but getting back to the pits and changing the wing cost me a lot of time. My race was already compromised then – it is not easy to race from so far back because you have to let the leaders through and you’re on the back foot the whole time. In terms of pace I was doing quite well, especially when in clean air, but obviously getting lapped costs you a lot of time. It is a shame as I feel that without the incident I would have been well into the points today. I still take encouragement from our pace and hopefully we can maximise the next weekend in Canada and get some more points.”

Vijay Mallya, Team Principal and Managing Director
“Monaco always gives us an opportunity to shine and seventh place for Sergio is a fantastic result for the team. We did most of the hard work yesterday in qualifying and Sergio delivered a faultless performance this afternoon. He should be very proud of scoring his first points in Monaco. I feel very disappointed for Nico who was unlucky to be hit by Fernando. He had similar pace to Sergio and would surely have scored good points as well. With six points we have moved up to sixth in the championship. The team is doing a tremendous job and the result today helps keep the pressure on the teams around us.”