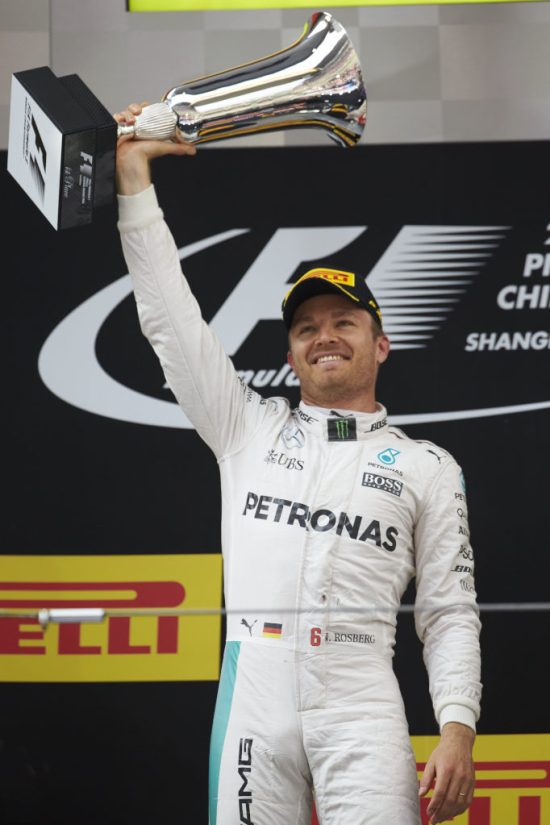 Nico Rosberg took his 17th career victory – his second at the Shanghai International Circuit, four years after sealing his first Formula One win at the same venue. Lewis Hamilton produced a battling drive to finish P7 from the back of the grid – despite incurring significant damage to his car in a first lap incident.

This result marks the 100th podium finish for the Mercedes-Benz Silver Arrows in Formula One. Rosberg (75) leads the Drivers’ Championship by 36 points from Hamilton (39) in P2. MERCEDES AMG PETRONAS (114) leads Ferrari (61) by 53 points in the Constructors’ Championship.

Nico Rosberg
“It’s been a fantastic few days for me here in China. First of all, the fans have been amazing from the moment I arrived. They’re so enthusiastic, which gives us drivers a very special feeling. Then, racing wise, it was an almost perfect weekend. Only the start could have been better – but luckily I was able to pass Daniel later on the straight and from then on I could build up a gap. I must say, I’ve never had a better balance in my car than I had today. It was really perfect, so a big thanks to everyone who helped me achieve that. I’m a very happy man today and, after three races I can be really pleased about how my season has gone so far. But it’s a very long year ahead and there’s a lot of points still on the table, so I’m not losing my focus. Now I look forward to Russia, where I started my good run of qualifying results last year. Hopefully I can get on a nice run like that again.”

Lewis Hamilton
“That was definitely a difficult weekend. I got a good start – but it’s always tricky being at the back and trying not to get caught up in the domino effect of any contact at the first corner. I tried to avoid whatever happened in front of me but I just got tangled up in it. It was just a bit unfortunate, really. From there it was always going to be a battle – but I had a lot of fun fighting back through! There were plenty of overtakes, from what I can remember! I gave it everything I had and P7 was about the limit. There was nothing left in the tyres at the end and, although it’s pretty good for overtaking here, I had quite a lot of damage to the car which made it difficult to get close on the brakes. From what I could feel there was definitely some aero loss and possible suspension damage too, as the car seemed to be flexing all over the place. But that’s racing – it happens sometimes and at least I still managed to get a few points on the board. It’s a pretty big hit points-wise today – but I’ll just have to do what I can to make it up over the next few races. Onwards and upwards…” 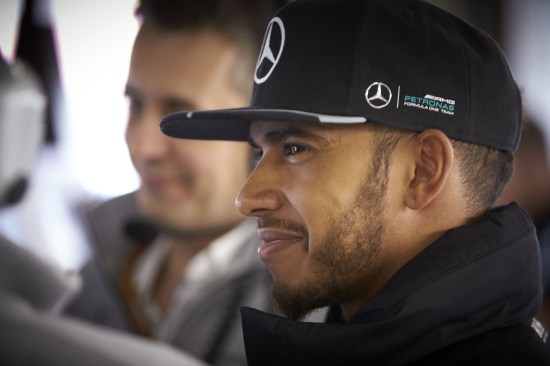 Toto Wolff, Head of Mercedes-Benz Motorsport
“That was a rollercoaster race. Nico enjoyed the perfect weekend: he was totally dominant this afternoon, always in control of his performance and did really a flawless job. For Lewis, the circumstances couldn’t have been more different. He got a great start, tried to stay out of trouble in the first corners and still got collected by a Sauber, who was avoiding another car coming back on track. His front wing was lodged under the car for a while, which damaged the leading edge of the floor and cost him a chunk of downforce for the rest of the race – though it was hard to know exactly how much during the race. We did something different with him under the Safety Car, cycling through the SuperSoft tyre with no loss of position, in order to open up some strategic options later in the race. He put in a great recovery drive and pulled off some great overtakes – but the damage to the car meant the tyres didn’t last as long as we had hoped and made it hard to catch cars through Turn 13 before the back straight. He still did a great job and kept charging to the end – but it was damage limitation again for him this afternoon. We are just three races into the longest season in Formula One history, so this isn’t the time to be looking at Championship tables or points gaps. We just need to keep scoring points right now, continue to work on our reliability after some wobbles this weekend and keep working very hard to bring more performance to the car and Power Unit. Today looked like it could have been a three-way fight with Mercedes, Ferrari and Red Bull if our rivals had a cleaner race – so there is no margin for us to relax.”

Paddy Lowe, Executive Director (Technical)
“Starting on Lewis’ side, one of the debates we actually had overnight was whether to do a bit more work to the car and start him from the pit lane, which ironically would have been a better decision in hindsight given what happened at the first corner. Equally, Lewis had by far his best start of the season, which ironically contributed to him being caught up in the cascade of collisions ahead of him. So, a perfect storm of unfortunate circumstances all round put him on the back foot straight away. We could see that there were problems with the car – both aerodynamic and mechanical – affecting him through the low-speed corners in particular. Under the safety car, we chose to perform consecutive pit stops with Lewis to get rid of the SuperSoft and enable us to run the rest of the race on the Soft, which was the stronger race tyre. As it transpired, his first set of softs were cut from the first corner incident – something we were unaware of at the time – which meant we were then forced to run the medium at the end of the race, rendering our SuperSoft eliminating tactic redundant. So, overall, Lewis did a great job to recover what he could with a car that was significantly underperforming. On Nico’s side, he actually had a less good start, losing a place into the first corner – although he was obviously running a less grippy tyre compound than the cars around him. He was, however, able to re-pass Daniel quite quickly once DRS became available and went on to have a straightforward race from there – running a soft/soft/medium strategy as intended from the beginning. An uneventful race from his perspective – but that’s not to underestimate the top job he did to manage the car safely within its limits and claim a well-deserved third victory of the season – and the 100th Formula One podium for the Silver Arrows in the process. We now look forward to Russia – targeting a clean and successful weekend on both sides of the garage.”

Well, now we know thanks to the Business Book GP2014 and reported on TomorrowNewsF1.com: