Following on from my piece on Formula One art commissioned by Bernie Ecclestone, I’ve now had a bit of time to sift through the notes of my discussion with the artist, Mark Dickens.

So then Mark Dickens, how did the idea of creating F1 art come about?

MD: Three years ago I was commissioned by the Yas Marina circuit to create 10 paintings – focusing on each F1 team – that would commemorate the opening of the new circuit.

Working with the drivers, I asked them to choose pieces of poetry from Rudyard Kipling, handwriting lines from their favourite poem which would provide me with some insight about them.

Poignantly, as circumstances were to later dictate, Massa chose If (…you can keep your head when all around you are losing theirs…) just before his accident.

Mr E saw my work at the unveiling, which gave him the idea of doing something similar for F1. We talked and shaped the new series together over a period of time, with me crafting a piece for every race on the calendar.

MD: It’s a big passion of his. Bernie owns quite a big collection – a very eclectic mix of works. He buys what he likes, regardless of whether it’s a famous artist, or priceless piece. Very refreshing.

We then set about approaching all the circuit CEOs and feature the series on them, asking what hosting a race meant to them.

But I wanted to portray a different side of F1. I wanted to incorporate the world of F1 within the host city – blend the two together. Both have their own sense of dynamism. F1 is about the city; it often promotes the city. Countries take on the F1 challenge to promote the city.

How did the paintings take shape?

MD: I asked each CEO to express what F1 means to them, in a very personal way. Their words were then transferred to the paintings. My work is about portraying a more positive side of humanity. So I was looking for the beauty within F1.

I collected all the information about the circuit and the city, then I pieced it together when I got back in the studio. I probably used about 50 photographs. It’s a question of building up story layers using resin to give each canvas a sense of depth. I also used fabric taken from every city. The resin is yellow and gives it that slightly dated look. Had them all on my wall in the studio. They all had to feed off each other.

How would you describe this beauty?

MD: By the forms – of the cars, which often show a natural beauty. They are very elegant with their flows. Even the modern motorhomes, the architecture, they are quite classic designs now. Everything has a purpose, is controlled. There is a purity of design which says a lot about the teams themselves.

A huge thanks to David Hayhoe for snapping the images from Mark Dickens’ F1 art exhibition the other day.

Incidentally, David compiles what I regard to be the bible for F1 stats because of its accuracy and therefore reliability for an F1 writer and analyst – the Grand Prix Data Book.

It’s a complete statistical record of the F1 World Championship since 1950 and David is now looking for a new publisher. Someone please give this wonderful man a home. He’s on djhayhoe@gmail.com 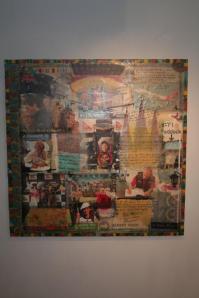 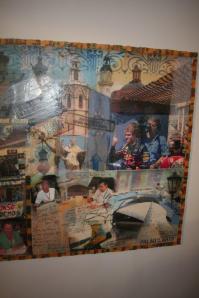 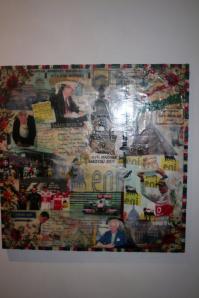 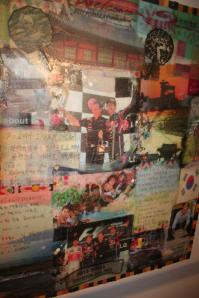 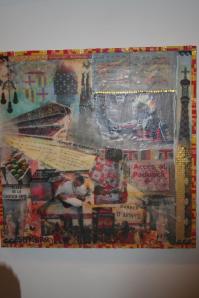 Can’t understand how few news outlets have picked up on this. But a special exhibition of Formula 1 inspired artwork was unveiled by artist Mark Dickens in London the other day.

Held at the Cello Factory on the South Bank, the exhibition marked the culmination of a year-long art project, commissioned by Mr F1, Bernie Ecclestone, aimed at capturing the essence of the 19-race 2011 Formula 1 World Championship from Australia to Brazil.

Through these pieces of art, Mark Dickens has showcased the beauty and dynamism of each host city. Integral to the artwork is Mark’s collaboration with the circuit CEOs and chairmen, sponsors and other dignitaries all expressing what Formula 1 means to them in their own writing. The works have all been individually created and finished by Mark, using mixed media panels combining print, paint, fabric, photographic transfers, embellishments and hand-written text set on to marine board panels.

Mark attended each of the races throughout the 2011 F1 season, taking in first-hand all the culture, atmosphere and excitement. The works have succinctly blended the cultural and architectural beauty of each host city with the technology and unbridled passion of Formula 1 racing – a potent combination.

The works of art of each the featured host cities will be presented at each event throughout the 2012 Formula 1 season which gets underway this weekend.

Images and interview with Mark to come.

Come to think of it – so has Force India:

The next two are from the recent test in Jerez: 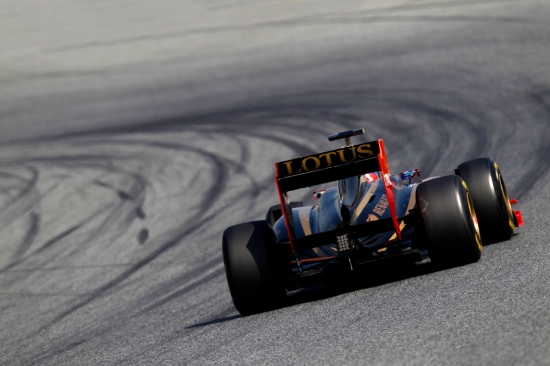