Mercedes-AMG Petronas Motorsport scored a 1-2 victory in Suzuka. Hamilton took his 71st career victory – his 50th with Mercedes, ninth of the 2018 season and fourth at the Suzuka International Racing Circuit. Bottas came in second to complete the second 1-2 for the team in a row – his first podium at the Japanese Grand Prix and 30th podium finish in Formula One. Red Bull’s Max Verstappen was third.

Today’s result marks the fifth consecutive win in Suzuka for Mercedes and tenth win at the Japanese Grand Prix for Mercedes-Benz Power. Mr Hamilton (331 points) leads the Drivers’ Championship by 67 points from Sebastian Vettel (264 points) with Valtteri Bottas (207 points) in P3 and with 100 points left to be scored in the season.

It does rather look like Hamilton is on the way to his fifth world title but, as we know only too well in F1, you just can’t be too sure – anything can happen. Always expect the unexpected.

Lewis Hamilton: “I was having so much fun driving this track. I was really able to just embrace the moment and enjoy every single lap, every single corner and the feel of the car. Suzuka is such a unique circuit, you go down a hill into Turn 1, then up-hill, you go underneath the track – it’s one of my favourite circuits.

“The pace was really great and this is definitely the best weekend I’ve had here and the best feeling I’ve had here balance-wise, it was really lovely. There’s still 100 points available, so we have to try and focus and never be complacent. (However)… The harmony in the team and the performance of every single individual in the team is the best it’s ever been. But we’ve always got areas that we can improve on, collectively and for me personally, so we will keep pushing and keep raising the bar.”

Valtteri Bottas: “This is a perfect result… and a great reward for an amazing performance from the entire team this weekend. I’m happy that we could bring it home like this after qualifying on the front row yesterday. This was my first podium here in Suzuka which was great. I get a lot of support from the local fans, I can really feel it and it means a lot to me.

“My race was pretty straightforward. We actually had a bit of margin to save the engine. It probably looked much closer on TV than it actually was. I had one lockup going into the last chicane where Max got a bit closer, but otherwise I was just managing and it was all under control. The first stint on the Soft tyres was a little better than the second one on the Mediums, where blistering was a bit of an issue, but no drama. Overall, this was a great weekend for the team.”

Max Verstappen: “After the penalty and incident with Seb I’m really happy to come away with another podium in Japan. The car felt good and we were able to compete at the front for the entire race, which at this track makes it even better. Judging by a few mistakes he made it looked like Bottas was pushing hard on the last few laps. It’s hard to follow anyway so I just did my best hoping he would make another fault and I could be in a position to take advantage.

“I felt a little hard done by with the penalty I got while defending against Kimi. I was trying my best to get back onto the track as quickly as possible instead of just cutting the corner, perhaps next time I will just cut the track. The incident with Sebastian was a very similar mistake to mine in China earlier this year, I think he could have passed easier if he had waited. It shows that even the most experienced drivers can make errors when under pressure. I’m now very excited to get to Austin, we have good performance and it’s a great place to visit.” 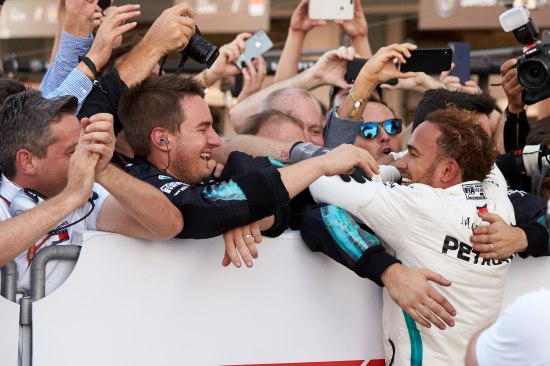