Romain Grosjean finished P9 and Pastor Maldonado P11 after spirited runs up the order in the Brazilian Grand Prix. After a disappointing qualifying yesterday, today’s 71 lap race saw both drivers making moves on their rivals whilst employing different tyre strategies. Maldonado looked like scoring with P10 until late in the race and did receive a five second penalty, served at his final pit stop, for contact with another driver.

Romain Grosjean, P9, E23-04:
“It was a fun race, and I enjoyed going through the field with some nice overtaking manoeuvres with our aggressive race strategy. It was quite hard to follow the cars but we had good power to overtake into turn 1. It has been an emotional weekend so it is good to be back in the points. The next race will be my last one with the team and taking the chequered flag in Abu Dhabi will be very special but I will give my best to bring a good result.”

Pastor Maldonado, P11, E23-03:
“It was a very active race with lots going on. We used a different strategy to most by running with the slower but more durable tyre for the first stint, when it was difficult to make progress against those on the softs. That meant when we changed to the softs we could push harder in the middle stint and make some good places. Then at the end we were defending with harder tyres from those with softer and fresher ones so it was difficult to keep P10, but from where we started it was a good race.”

Federico Gastaldi, Deputy Team Principal:
“A great job from Romain, and also from all of the race team here, to work so well at what is nearly the end of a very long season. Thanks too to everyone at Enstone for all their efforts which we were hoping would be rewarded by both cars in the points. It’s a big shame that Pastor received a penalty as otherwise he would have finished at least P10, and this is very frustrating for all of us.”

Alan Permane, Trackside Operations Director:
“That was a strong race where we got back to where we should have been fighting after yesterday’s disappointing qualifying. Romain drove superbly today and Pastor should have scored too were it not for his penalty.” 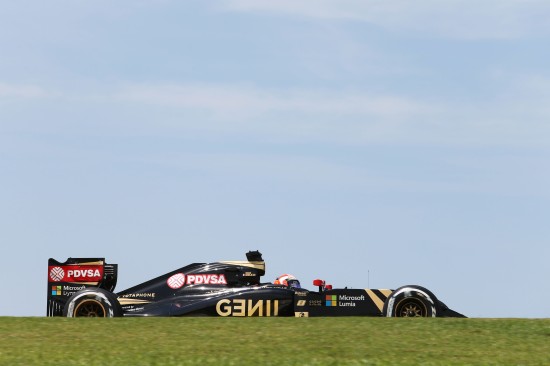