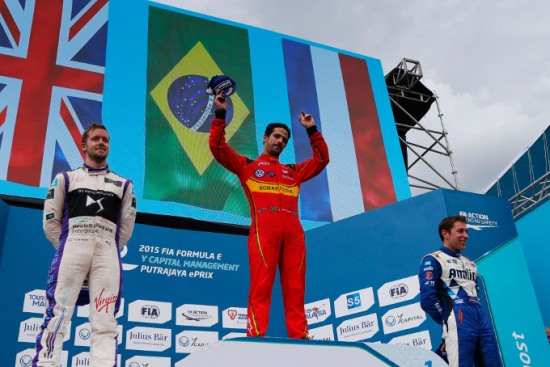 Lucas di Grassi claimed his second FIA Formula E Championship win in a race at Putrajaya in Malaysia that was packed with incident from start to finish.

Even before the race had started Stephane Sarrazin was in trouble as his Venturi cut out on the dummy grid. With the Frenchman unable to take up his place on the front row alongside the Julius Baer Pole Position winner Sebastien Buemi, the start had to be delayed as he was pushed to the back of the field.

With no one directly alongside him, Buemi had a clear run into the first corner, and as was the case in the season-opener in Beijing, the Renault e.dams driver pulled away into a comfortable lead. But this would be no back-to-back win for the Swiss, as his car ground to a halt as the race neared its mid-way point.

With Buemi’s car stopped on track, the team opted to pit his team mate Nicolas Prost as this point, as he had also been suffering with his car cutting out. The early pitstop ensured the Frenchman took over the lead after the mid-race car swaps took place, but as he had to make his energy last for longer than his rivals, combined with his car troubles he was unable to prevent the trailing pack from passing him.

Di Grassi took over in second following the pitstop phase, but only because Dragon Racing’s Loic Duval suffered an over-long stop. The Frenchman had briefly held the lead following Buemi’s troubles, but was now behind not only di Grassi but the Team Aguri car of Antonio Felix da Costa too.

As Prost struggled with his car cutting out, di Grassi made his move for the lead. Behind them Da Costa and Duval entertainingly disputed third. Eventually both found a way by the Renault e.dams and Duval started to close in on the leader. But when a damper broke in the suspension of his car, his great run was ended and di Grassi was left unpressured at the front and duly collected the win.

“You can see how difficult the conditions were with the amount of sand I have in my eye, the amount of sand I have in the car,” he admitted. “It was an extremely tough race, mainly determined by battery temperature. But gladly we managed it better than the others, we did a fantastic job. The team in the background did a perfect job with the strategy and we managed to claim the victory and I’m now the leader in the championship.”

After a mistake in qualifying and a brush with the wall, DS Virgin’s Sam Bird started back in 14th. But the 2014 Putrajaya ePrix winner has an affinity with the circuit, and while those around him were having troubles he was able to concentrate on driving his own race, staying out of trouble and when Jerome D’Ambrosio crashed out of second place for Dragon on the final lap, the Brit inherited the runner-up spot.

“I’m absolutely chuffed,” he beamed. “This one is for the boys at Virgin – I don’t think that too many people know that before the race we were down in the dumps because I didn’t think we were going to finish the race because we only had one battery in the car. The Virgin boys fixed the car so quick, this is for the Virgin boys! If people don’t say Formula E is exciting, then I think they didn’t watch that race. It was carnage, but cool carnage. It’s a series that people should watch because that’s fantastic racing, it’s unreal.” 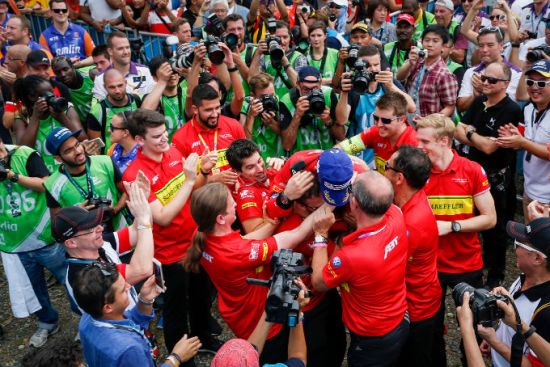 Da Costa’s great run for Aguri ended when his car cut-out too, which handed a podium finish to Andretti’s Robin Frijns. However, the Dutchman was exceptionally fortunate to finish the race after clouting the wall as he made a passing move on the hobbled Duval.

Even though the suspension and steering were deranged, he somehow kept the car pointing in the right direction and crawled over the line for his first Formula E podium.

“I felt like I was a rally driver!” he exclaimed. “Duval had a problem in front of me and he also had a suspension failure. I overtook him before Turn 9 and I went in just a bit too quick and there was a lot of rubber and dirt. I was on it and I saw the wall coming and I said, ‘this is it, it’s over’. It was quite a big hit and the rear was completely bent, the steering was totally not straight any more. Right corners were fine but in left corners I really had to take it easy. But I’m surprised how strong the Formula E car is.”

Despite his problems at the start Sarrazin came through to fourth, while Bruno Senna took fifth for Mahindra Racing. Da Costa managed to get his car restarted and came home sixth, while Daniel Abt finished seventh for Abt Schaeffler Audi Sport.

Nelson Piquet Jr was again a FanBoost winner and kept out of trouble to score his first points of the season for NEXTEV TCR in eighth, while Nick Heidfeld finished ninth despite having been tipped into a spin at the first corner following a three-way tussle with Jean-Eric Vergne (DS Virgin Racing) who was eliminated on the spot and Jacques Villeneuve (Venturi).

Prost picked up the final point in 10th, while Buemi had the consolation of securing the Visa Fastest Lap and two bonus points.

After one of the most eventful races in Formula E’s short history, the teams and drivers now have a well-earned break before the series resumes in the amazing beachside setting of Punta del Este on 19 December. 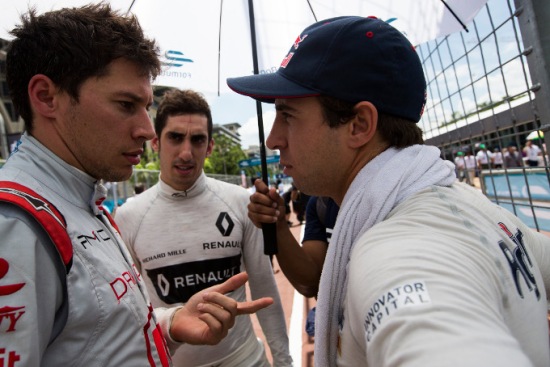