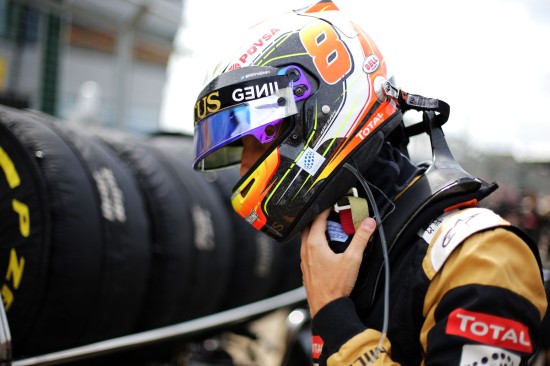 Lotus F1 Team’s hopes for the British Grand Prix evaporated before the completion of the first lap after an incident instigated retirement for both Romain Grosjean and Pastor Maldonado. Contact between Daniel Riccardo’s Red Bull and Maldonado’s E23 led to contact with and damage to the latter’s car; Grosjean retired almost immediately whereas Maldonado was able to complete more of his lap before being told to park and retire.

Romain Grosjean, DNF, E23-04:
“That was a very short race for the team and I feel for everyone here at Silverstone and at Enstone. Daniel must have thought his brakes and tyres would be able to slow him better than they did and the result was the end of both my and Pastor’s race. No-one likes to end a Grand Prix like that as so much effort goes into making and preparing the cars. I know we have many fans who want to see us race so I feel for them too. Budapest is next, and we’ve gone well there in the past. I’m pumped-up to fight for every single point available.”

Pastor Maldonado, DNF, E23-03:
“At first I thought I had a puncture and would be able to return to the pits and re-join the race but unfortunately the damage to the car was more serious than that and I had to retire. There is nothing you can do in situations like these as it’s all part of racing. Now my focus is on the next race where we’ll be trying our very best as always.”

Federico Gastaldi, Deputy Team Principal:
“Motorsport is sometimes a cruel sport and we saw that today. There was nothing either of our drivers could have done to avoid the first lap incident and that was our race over. It’s been a frustrating home weekend for us. We weren’t able to show the pace we have in the car, we’ve suffered from a few niggles, then it was a very early bath for both our guys. Our focus is now very much on Budapest and doing everything we can to ensure we perform at the best of our ability there.”

Nick Chester, Technical Director:
“Both Romain and Pastor were the victims of over-exuberance at the start of the race meaning that both returned to the garage for a very short debrief after only a lap on track. It’s now a rapid return to Enstone to put everything we can into preparing the cars for Hungary and our next opportunity for a points haul.”