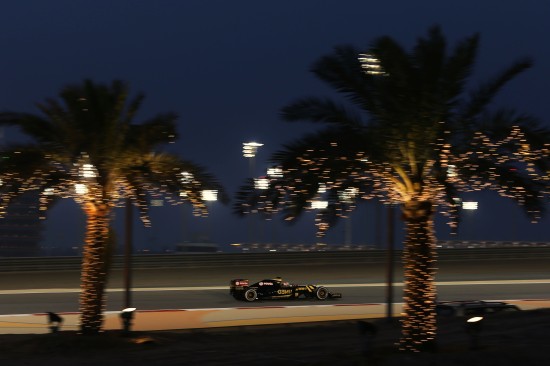 Nice night shot of Romain Grosjean on the Friday.

Romain Grosjean drove a strong and measured Bahrain Grand Prix to finish seventh whilst Pastor Maldonado endured an eventful race to finish an eventual fifteenth in the first night race of the season. Grosjean started from tenth and worked his way up to seventh without incident. Maldonado started from sixteenth on the grid, served a five-second pit stop penalty then experienced engine-kill activation when entering the pits for his final stop. The subsequent reset and restart process cost Maldonado considerable race time, translating to his fifteenth-position finish.

Romain Grosjean, P7, E23-02: “It had been a tough weekend until now for me, so it was really great to get another strong seventh position. Today’s race was great, especially as there was lots of overtaking. I was really hoping to catch Daniel Ricciardo but he was too quick for us today. It was quite difficult to manage tyres, especially with the rears so I think we did a good job to make the two-stop strategy work. We only had new medium compound tyres for the race, the rest were scrubbed, so it really was a great job by the team. It was a good recovery from Friday and Saturday’s session and I’ll happily take seventh place as my birthday gift for myself and the team.”

Pastor Maldonado, P15, E23-03: “That was a frustrating race for me. I pushed as hard as possible at the start on the medium tyres whilst everyone around me was on the grippier soft compound rubber. Once I moved to the soft tyres I was able to set the race’s then fastest lap so things looked good with our strategy. Unfortunately the engine anti-kill triggered when I came in to make my final pit stop which cost me a lot of time. It’s frustrating as we should have finished strongly. My focus is now Barcelona where I’ve delivered very strongly in the past.”

Alan Permane, Trackside Operations Director: “That was an excellent, straightforward copybook race from Romain. Unfortunately, we didn’t have the pace to challenge the Red Bull of Daniel Ricciardo today but we were ahead of the rest of our near rivals. We were able to complete some very quick pit stops, which helped both drivers during the course of the race. For Pastor we ran with a different strategy to most of the field, with a three-stop strategy, starting on the harder medium compound Pirellis. This looked to be working very well and Pastor should have finished around the same position as Romain however a five-second pit stop penalty and the engine-kill activating when he entered the pits extinguished any opportunity of a strong result.”