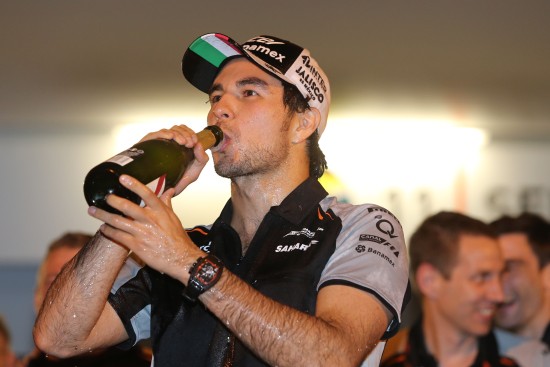 Sergio Perez celebrates his third position with the team. 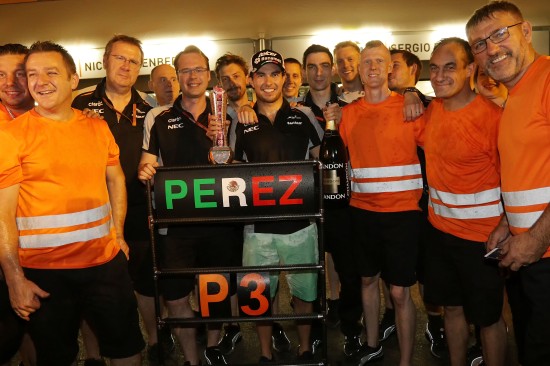 Force India and Sergio Perez picked a second podium finish of the season today after a strong performance at the European Grand Prix in Baku. Nico Hulkenberg battled to ninth place to ensure a double points finish for the team.

Sergio Perez: “I knew that the podium was possible today, but we really had to work hard for it. The key to my race was the great start I made to get around a Williams (Massa) and a Toro Rosso (Kvyat). Then, in the first stint I was suffering with graining of my supersoft tyres and we had to decide whether to wait for it to improve or to make an early stop. In the end, we stayed out longer, which was the right decision, but when I came out of the pits I struggled to warm-up the soft tyres and I was under big pressure from Lewis behind.

“I pushed as hard as I could and opened up a gap, and then I focussed on looking after my tyres. I closed in on Kimi and I knew he had a penalty, but on the final lap I got very close to him and saw the opportunity to overtake him, so I took it. To be on the podium for a second time this year feels fantastic. The team has done a brilliant job and we are having an amazing year.”

Nico Hülkenberg:  “It was a fairly tough race for me. The start was ok, but coming into turn one someone (Gutierrez) hit me from behind. I lost a couple of positions trying to control the car and that put me a bit on the back foot. Getting through traffic in the opening stages was not very easy and it cost me a lot of time. Then, for the early part of the race, I was struggling with oversteer and in general I couldn’t find the same harmony with the car that I had in practice.

“Making the supersoft tyres last as long as I did – 31 laps – was not easy and by the end of the race I had very little left, but it was a risk I was happy to take to make our strategy work. The car had great potential all weekend long, but I feel I paid for the mistake I made yesterday in qualifying. However, I am pleased for the team’s result: it means we bring home a bunch of points which is a boost for our season.”

Robert Fernley, Deputy Team Principal: “What a fantastic result from a weekend where we looked strong from the start. It is a success for the whole team: from the crew that repaired Checo’s damaged car after FP3 and produced two brilliant stops at a crucial time, to the guys on the pit wall who made the right calls, and of course everyone back at base.

“We knew we had the pace to fight at the front, even if we were starting further back than we wanted, but we delivered the result in the end. Checo drove well and a second podium in three races shows that he is getting the potential out of the car. Nico was unlucky to be hit at the start by Gutierrez, which ultimately compromised his race. He lost a few positions, but was able to keep the car facing the right way.

“Starting in P12, he had a different strategy and he was only a couple of laps away from finishing seventh, but he still claimed some important points. Today’s result strengthens our fifth position in the championship and moves us closer to fourth . I have no doubt there will be celebrations tonight!”