Great shot of Pastor Maldonado in the pit garage.

Romain Grosjean drove a measured and accomplished Spanish Grand Prix to finish eighth despite a mid-race loss of fourth gear, whilst a strong run from Pastor Maldonado was compromised by an additional pit stop to modify damaged bodywork, after which he subsequently retired.

Romain Grosjean, P8, E23-04:
“It was a tough and eventful race. Firstly, I’m glad to say that no-one was seriously injured in the pit stop. The rear tyres were experiencing a lot of degradation and I just couldn’t stop in time. It was a really scary moment for me, but probably more scary for the crew. I checked everyone was okay and I certainly owe them some beers! In the race, I lost fourth gear during the race which made things a bit of a challenge. It was a tough race but it’s good to be in the points for the third race in a row and we can be proud for what we’ve achieved today.”

Pastor Maldonado, DNF, E23-03:
“We were having a pretty great race at the start and our strategy was working well but then the damage to my car meant that I had to make an extra stop and my race was completely compromised. For sure, we have the pace in the car and in every race we have shown the potential to be in the points so it’s only a matter of time before we get a good result; I’m looking forward to Monaco.”

Federico Gastaldi, Deputy Team Principal:
“Both our drivers put in really strong performances today, with Romain finishing in eighth despite a gearbox issue and Pastor driving relentlessly before we retired him, but the real heroes today were the pit crew. Our pit box proved slippery causing Romain to stop long, resulting in three of the crew being slightly worse for wear, but nevertheless they were back in action for the subsequent stops. This is another endorsement of Enstone’s never give up spirit and we know the guys will be fighting fit for Monaco.”

Nick Chester, Technical Director:
“That was an eventful race for us. It was a good result for Romain with another four points in the bag despite an issue with the gearbox which he managed well. Pastor was looking quick but we had to pit him to remove some damaged bodywork. The extra stop proved too much of a penalty as despite him setting strong lap times, we weren’t able to work back up the order so we retired the car to avoid any additional damage.” 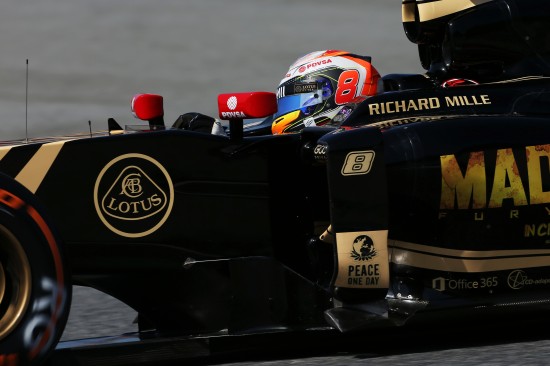